We are excited to announce one big step in that direction. As of today, anyone can now run a Flow node. We are excited to introduce a new permissionless node type called an Observer node: an unstaked node that runs on consumer grade hardware, and provides a locally accessible, continuously updated and verified copy of the block data.

With the introduction of the permissionless Observer node, the network unlocks participation opportunities for everyone. Having your own node means you don’t need to trust information about the state of the network provided by a third party, including other benefits such as privacy, security, reduced reliance on third-party servers, censorship resistance, balanced load distribution, and increased decentralization of the network.

Furthermore, an additional specialized node type, called an Archive Node, will also be available by the end of the year. Archive nodes provide access to historical data which is no longer accessible via regular access nodes, as well as to be able to run Cadence scripts without being subjected to rate limits. The Archive node is a result of a community contribution from Optkat, and will also be permissionless. Read on for more information.

An observer node is similar to an access node and provides a locally accessible, continuously updated and verified copy of the block data. It serves the gRPC Access API (support for REST API coming soon) but, unlike an access node, an observer node does not need to be staked and anyone can run it without being added to the approved list of nodes.

However, it makes no trust assumption of the upstream access node or the observer node which is providing the block and locally verifies that the blocks that are received are the correct extension of the chain e.g After receiving valid blocks A, B and C when it receives block D, it verifies that block D is indeed signed by the consensus nodes and is a valid next block.

The block data that is received is indexed and made available via the Access API. For Collection, Transactions and Account queries, it delegates those requests to the upstream access node. Similarly, transactions and scripts sent to an observer node are also forwarded to the upstream access node. Future versions of the observer node will be able to serve this data locally as well.

Since the observer node is not staked, it does not produce or execute blocks but instead serves as an unstaked access node that can be easily run on any consumer-grade computer which has enough disk space. 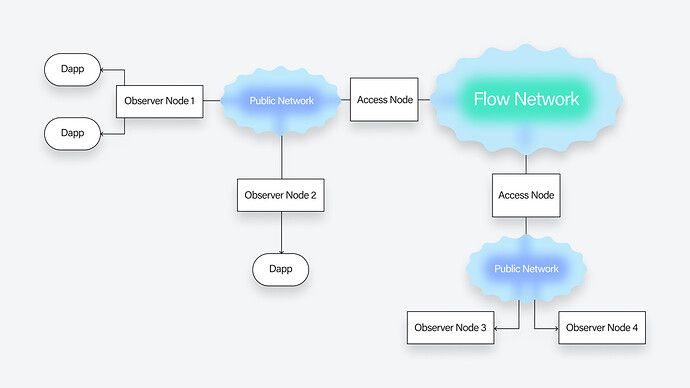 Flow has different types of nodes instead of a single validator node. Consequently, not all node types have all the data. Flow node data is divided into Protocol state and Execution state.

Protocol State is the state of the operation of the Flow network protocol, including the identity table and resources produced by nodes in the Flow network: blocks, collections, receipts, approvals, seals, etc.

Execution State is the state of Flow accounts, smart contracts, resources, etc. This state is stored in full only on Execution nodes.

Who should run an observer Node?

The observer node provides an alternative to running an access node. Hence it is ideal for Dapps that need access to latest block data available locally e.g a wallet application that needs to track the latest block ID and height.

In general, any consumer-grade computer with a decent network connection and sufficient disk space should be able to run an observer node.

To enable permissionless access nodes certain security checkpoints need to be met including baseline BFT protection against different attacks, code hardening, appropriate rate limiting and pentesting. At this time, the core protocol team is inviting bounty proposals for battle testing the feature - if you want to know more, you are invited to get in touch!

The testing is focused on the BFT resilience of the Flow networking layer and the access node gRPC endpoints.

The permissionless access node rollout will be done by putting out open slots at each epoch which can be claimed by anyone who wants to run an access node. Initially, a limited number of slots will be released every epoch, and as the testing concludes, more slots will be made available.

The Archive node provides a scalable and efficient way to access the history of Flow protocol and the execution state for the current spork. Like the observer node, it too can be run by anyone without being staked or added to the approved list of nodes. The Archive node follows the chain, stores and indexes both protocol and execution state, and allows retrieval of blocks, collections, transactions and events from the genesis of the current spork.

It also allows script execution and other read-only queries that require the execution state to be read. It can answer any queries from past data e.g. “what was the Flow account balance at height X?”, where X is several thousand blocks in the past.

Who should run an archive node?

The archive node will be consuming large amounts of data (100s of GBs) and requires a machine with large disk space.

Archive node will consume hundreds of gigabytes of data and currently will hold the entire execution state in memory. While this will be improved in the future, archive nodes will currently require powerful memory-optimized machines for operation.

Following are the planned milestones in the coming weeks and months: